History of the Island

There are few references in the ancient literature to the historical course of Anafi in pre-Christian times. The mythological tradition states that Anafi was first inhabited by the Phoenicians and the island received its first name, Membliaros, from their leader. However, the continuation of the mythological tradition reserved for Anafi a charming aspect from the journey of the Argonauts, which was the mythical explanation of the Greek colonization in the Black Sea.

The Journey of the Argonauts and Anafi

Jason manned the ship “Argo” with heroes and famous people of the time, among whom was Hercules, in order to bring from Colchis, to the usurper of his throne, King Pelias, the “golden fleece” and to take over the kingdom. On their way, the Argonauts, after obtaining the “golden fleece”, had an adventurous journey, during which, through the Danube, the Adriatic and the Tyrrhenian Sea, they reached Crete, from where they started for Iolkos. In the deep penetrating darkness, the Argonauts were traveling in despair, when they asked for the help of Apollo who revealed to them the island of Anafi to which they moored and in honor of the god they founded the temple of Apollo Aigletis, (glamor = shine) giving the island »The name Anafi. Apollonius of Rhodes (295-210 BC) vividly describes the scene of the Argonauts’ journey from Crete, and their anchorage in Anafi. 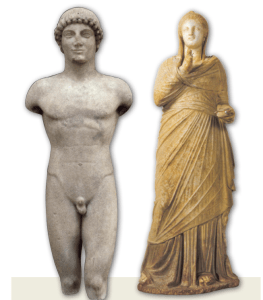 On the left, a statue of Apollo of Anafi (kouros) century located in the British Museum. Right, statue of a tied woman of the 1st century AD from Anafi. The statue was discovered in 1823 and acquired by the Hermitage Museum in St. Petersburg in 1863.

The existence of the ancient city on the Kastelli hill and its extensive wall as well as its cemetery, show a prosperous city, which seemed to have a strong presence even during the Roman period. The absence of scripted sources is complemented by the absence of excavations that make it even more difficult to “fill” the historical tiles of the ancient city. Existing historical evidence shows that in the 8th century BC Anafi, like Santorini, was colonized by Dorian settlers, who were most likely forced to join the Athenian alliance later. The ancient city of Kastelli prospered during the Hellenistic era (3rd-2nd century BC) by minting its own coin, on one side of which is depicted Apollo Aigletis or Anaphaios and on the other a crater with a bee that symbolizes the development of beekeeping on the island, activity that is maintained to this day. The great sanctuary of the island was the temple of Apollo on the east side of Anafi. At the same time, west of today’s Chora, on the hill Pyrgi, a fortress complex was built to control the western side of the island which is not fully visible from Kastelli. South of Kastelli, on a dilapidated beach, the port of the city was created which was given the name Katalymatsa (probably from the word Katalymata), where remains of buildings and ancient fragments are preserved to this day. The Romans occupied Anafi. Numerous statues and the surviving sarcophagi confirm the prosperity of the city during that period. 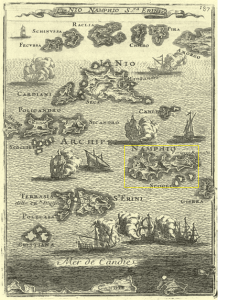 The island of Anafi (Namphio) on a map of 1683. In the area of Kalamos is marked Fortezza Ruinata, (ruined castle) while in the center (frame) is noted the settlement of Chora. The three islets south of Anafi are referred to as Scogli (rocks)

During the Byzantine period the island continues to be inhabited in Kastelli, but without any special presence. In 1207 after the conquest of the Cyclades by the Venetians led by Marco Sanudo, Anafi was passed to his comrade Leonardo Foscolo, who was succeeded by his son Giovanni who remained in power until 1269 when the Byzantines recaptured the island until 1307. However, the Venetians returned and with the houses of Gozzadino, Krispi and Pisani ruled the island for another 262 years, until 1537 when Anafi was occupied by the infamous pirate Haireddin Barbarossa who exterminated the whole population. During the first Venetian rule it seems that in parallel with Kastelli a new settlement was created in today’s Chora, while some fortifications were erected on Mount Kalamos, in the current location of the Upper Monastery of Kalamiotissa. Thus the whole southern part of the island was controlled, in contrast to the northern part which remained unprotected since there are no fortifications. Only the highest summit of the island, named Vigla, shows its use as an observatory, or kaminoviglatoria (fryktoria) for the transmission of visual messages. The only monument of the time is the Byzantine church of Ag. Antoniou on the north side of the island. Later but without specifying the exact date of its construction (17th century), is the monastery of Zoodochos Pigi or Kato Kalamiotissa at the eastern end of the island built on the ruins of the temple of Apollo Eglitis. After the fall of the Ottoman Empire in 1830 the rest of the Cyclades joined the Greek state. 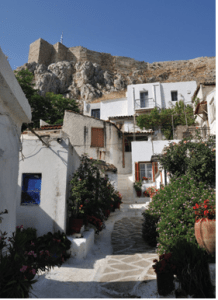 Anafiotika in Plaka. The Cyclades below the Acropolis

The Anafiotes Carpenters in Athens

In 1883 during the reign of Otto, with the proclamation of Athens as the capital of the Greek state, the need arose for experienced builders. The Anafiotes, like other skilled Cycladic craftsmen, gradually began to leave their barren islands and migrate to Athens. The Anafiotes chose the NE rocky slopes of the Acropolis as their place of installation, where they gradually created a Cycladic settlement by literally “digging” it into the rock. Where the other masons could not build, the Anafiotes built an entire settlement, utilizing the special texture of the area and placing their houses on the steep slopes of the rock. One hundred years later, in 1970, the demolition of the Anafiotika anchored on the rock began, in order to create a peripheral zone on the Acropolis and to highlight the “Walk” of the ancient Athenians.

Anafi as a place of exile

In the interwar period (1914-1940) for the criminal prisoners, in addition to the sentence of imprisonment, the sentence of exile was applied, a practice that was later extended to political prisoners. The aim of the exile was to isolate the unwanted populace from the wider community and confine them to isolated islands, usually with few inhabitants, where they could not practice their supposedly illegal activities or spread their “subversive” ideas. The first political deportations in modern Greece began in 1914 and continued in 1929 with a law known as the “Nickname”, the originality of which was to criminalize the views and thoughts of the citizens while the deportation decisions were taken arbitrarily by the police without a court decision. . The law mainly concerned the communists but there was no clear discrimination and so it worked more generally against the regime’s opponents.

Cookies are important for the smooth operation of webpage anafi.gr and for improving your online experience. Click "Accept" to continue or select "More" to see detailed descriptions of cookie types More Accept

For the smooth running of the website, we sometimes store small data files called cookies on your device. Most websites use them. What are cookies? A cookie is essentially a small text file that is stored on your device when you visit a website. Allows the site to remember your actions and preferences (such as login details, language, font size, and other appearance-related preferences) over time so that you do not have to repeat your selections when you return to or navigate through the site. one page to another. Cookie management You can manage or delete cookies as you wish - You can delete all cookies on your device, and you can set most browsers to prevent them from being saved. If you do, however, you may need to manually adjust your preferences each time you visit a site and some of its services and features may not work properly.
Go to Top